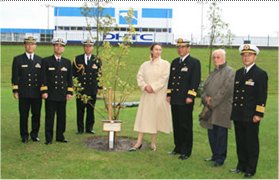 A delegation of the Japanese navy and embassy visited Den Helder on July 19, 2008 to take a look at the tree that was planted in 2006 as a symbol of the friendship that has arisen between relatives of crew members of Dutch and Japanese submarines both of which were torpedoed in the South China Sea during the Second World War.

In the weekend of July 16 to July 20, three Japanese navy ships visited the port of Amsterdam. The visit of the Japanese delegation to Den Helder took place in the presence of deputy commander Zeestrijdkrachten schout-bij-night Wim Nagtegaal, mayor of Den Helder Stefan Hulman, Hans Besançon and the daughter of one of the deceased sailors, Katja Boonstra.